Getting Back on Track

The last two weeks have been a complete blur. So much has transpired and I have experienced almost every emotion possible: shock, grief, disbelief, regret, sadness, nervousness, disappointment, raw, excitement, and most importantly, love. I wanted to take the time to reflect on the events and appreciate the journey.

I knew when May started that it would be a very busy month. I had been working feverishly to finish my painting in time for one of my biggest art shows of the year, Salem County Arts in Bloom. But, life had other plans. On May 10th, I received an early morning phone call from my mom informing me that my Grandmom had passed away. Even though she had cancer and was battling like a true champion, we were all still in complete shock. She had just one week left of her treatments and her doctors had expressed how wonderful she was doing just the day before.

The next few days I spent grieving her death and realizing just how unpredictable life can be. I realized I had to stop my efforts of finishing my painting and take the time to work through the emotions and be with my family. I also was organizing the photograph slideshow for her funeral mass. It was so much fun looking at pictures from throughout her life and remembering all the special moments we shared together. My absolute favorite was our weekly, four generation shopping trips to Aldi's. On Fridays my mom and Grandmom would met me and my kids at Aldi's. We would all do our weekly grocery shopping, together.

My brother was flying in from Indiana for the funeral which was held on May 15th. The night he flew in, my family came over and we finished organizing things for her funeral the next day. Since he would be flying out the next day right after the funeral, Brandon and I stayed up talking until midnight. We were both exhausted but it was so nice to be able to catch up on such a short trip home.

We had my Grandmom's mass at her church, The Church of the Incarnation, in Manuta. It was a beautiful send off of her. As I was kneeling in front of her casket saying my last goodbyes, my mom joined me. I wanted to remember everything about my Grandmom and at that moment I couldn't believe I'd never see her again. After the services, we had a delicious luncheon at the Telford Inn, and as a family, we went back to her house. We reminisced, watched old home movies, and took some group pictures.

My Grandmom was cremated and on Friday, May 18th (my Mom's birthday) we buried her with my Pop-Pop at the Gloucester County Veterans Cemetery. Afterwards, our family went to lunch at Gete's Diner. Later that afternoon I began setting up for the Arts in Bloom, which started the next day. I stayed up late and got up early and somehow I was able to get everything ready in time for the big show.

The next two days were filled with great conversations with loyal customers and new faces during the Arts in Bloom tour. Even though the weekend's weather was rainy and gloomy, I still had a great turn out for the event. You can read all about this year's Arts in Bloom by clicking here.

I was too tired to take my setup down, so on Monday, as a family, we spent the morning driving around town to pick up my direction signs and visit with some friends along the way. My husband invited them to come over and see my display. I decided to extend the invitation to anyone else that would be interested, via Facebook. That night, I was open from 4-8PM and had a great turn out of people who wanted to come but the weekend was just too busy. I was so glad that I kept the display up an extra day for others to enjoy and might do it again next year.

I spent the next two days disassembling my display and putting everything back where it belonged. I had just finished in time to get ready for my husband's cousin's wedding. We had a amazing rehearsal dinner at DiPaolo's Ristorante in Pennsgrove. The next day was the wedding which was held at Masso's Red Pine in Glassboro. It was a spectacular night celebrating the marriage of Bobby and Noelle! Everything was so beautiful! You can see pictures below.

The next day was spent prepping for a surprise birthday party for my mom! Before my Grandmom had passed away, we planned to do it Memorial Day weekend but with everything that had happened and other plans possibly being made, we weren't sure it was going to come to together. However, things fell into place and I spent the night making side dishes and decorating my house with my sister. On Sunday morning, I picked up mom's birthday cake from Terrigno's Bakery in Bridgeton, a special family tradition of ours. My mom was completely surprised! It was so nice showering her with love after a stressful and sad couple of weeks.


So now, here I am, looking to get back on track after a whirlwind two weeks. I wanted to write this blog post to appreciate everything that has happened, good and bad. To give myself perspective and share my experiences with you. I am so grateful for the family and friends who took the time to send a card, cook us dinner, or deliver a dessert during the wake of my Grandmom's passing. It is truly appreciated! I am looking forward to getting back into the studio and finishing my painting. Stay tuned for details about the big reveal. 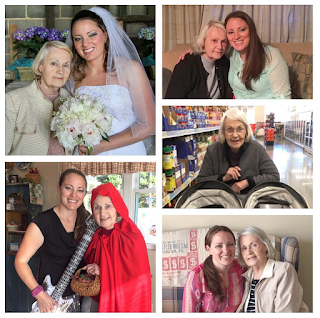 Some of my favorite pictures of my Grandmom and I 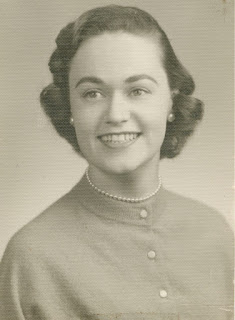 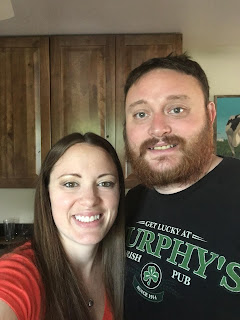 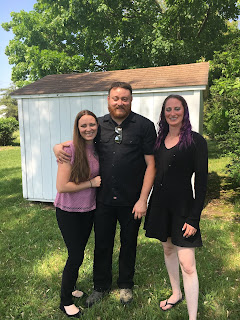 Me, my brother, Brandon, and my sister, Dana 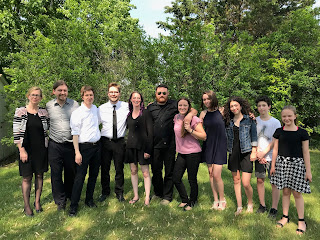 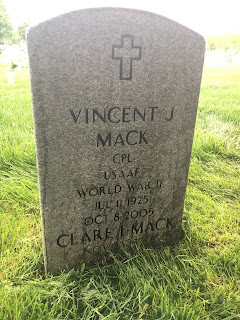 My Arts in Bloom Display 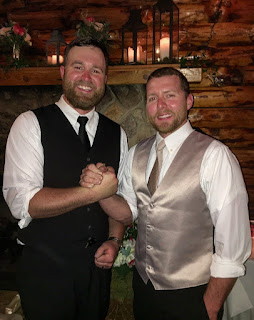 The Groom, Bobby, and my husband, Chester 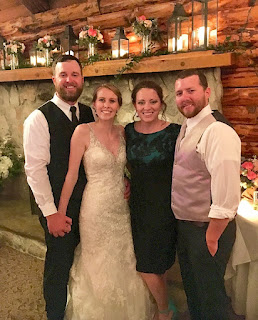 Bobby, Noelle, Me, and Chester 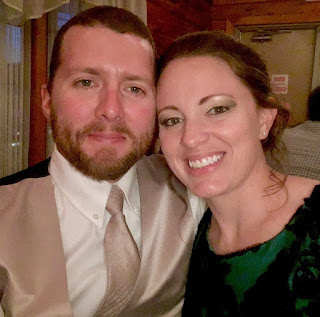 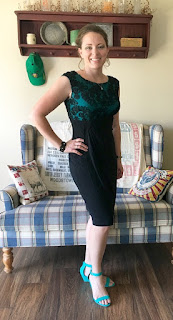 Posted by Kimberly English at 10:38 AM No comments:

This past weekend was the 10th Annual Salem County Arts in Bloom Studio Tour. I am overwhelmed with the support that I received. This year was special celebrating the 10th year of Arts in Bloom with a 10 Year Retrospective Show. In the spring of 2008 I had changed my college major from Biology to Art and this year's tour commemorated that experience. See the video below for a walk through of the display.

I am super grateful to those who enjoyed my work and chose to purchase products to make them apart of their home. Every purchase truly means so much! “Curious 601” was sold to a lovely couple, Nancy & Ron Cataleno, from Moorestown. I thought it was so ironic that they were from the town where I used to teach! It was their first time on the tour and we had a great conversation about how they found out about Arts in Bloom. They were shopping at Matteo Family Kitchens & Flooring and happened to see the brochure. I was one of the stops they chose and I am so glad that they did!

“Curious 601” was used for the 2016 Arts in Bloom publications, the 2017 Pitman Gallery & Art Center's Pitman Art Stroll, as well as shown in various galleries throughout southern New Jersey. She has been admired by many people but I am SO HAPPY that she now resides with a fellow artist in a town that I hold dear to my heart.

I am so honored to document and preserve the beautiful country living in southern New Jersey through my original acrylic paintings and photography. The most rewarding aspect of being an artist is being able to witness customers recognize or make personal connections with the landscapes I depict. Thank you to everyone who took the time to come meet me and view my artwork. I had visitors from Arizona, Florida, New York, Pennsylvania, Delaware, and of course, New Jersey.


Below are pictures and video from this year's Salem County Arts in Bloom Studio Tour. 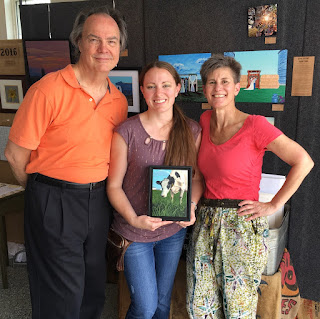 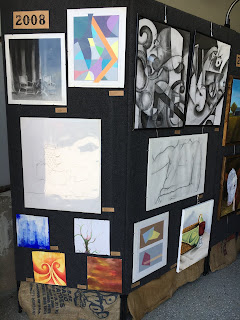 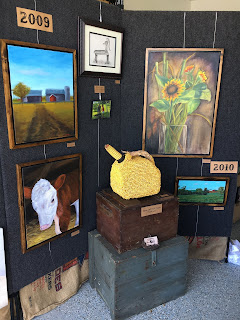 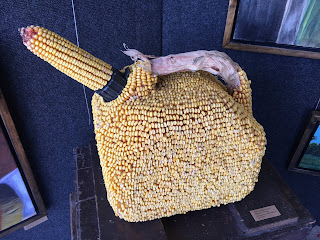 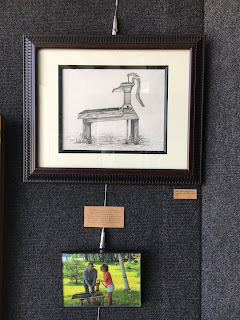 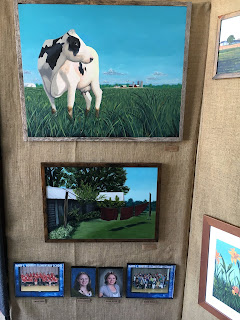 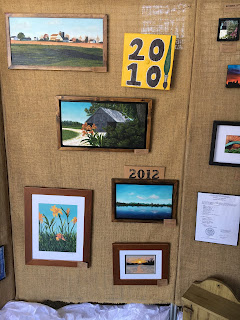 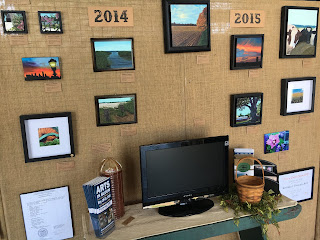 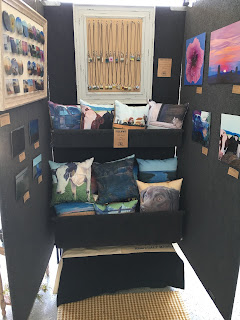 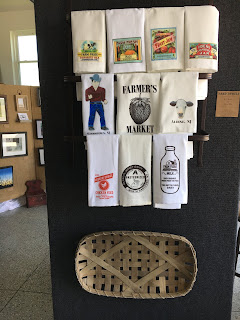 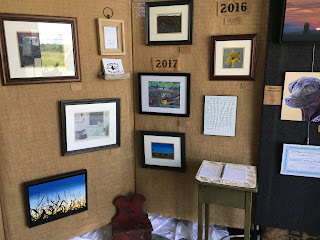 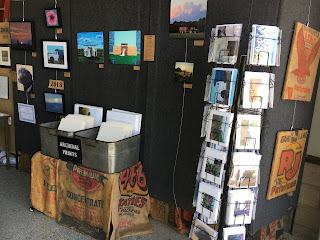 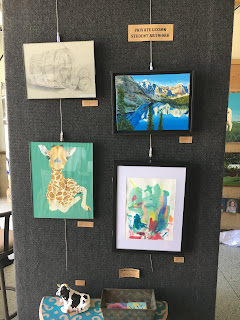 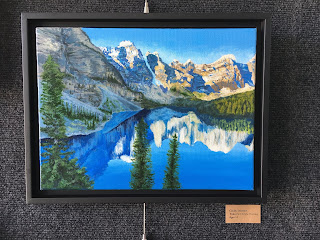 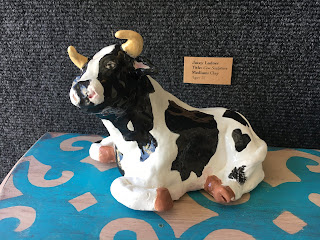 Posted by Kimberly English at 6:54 AM No comments:

Unfortunately, due to the passing of my Grandmother, I will not be doing a Friday night preview event. My heart is broken mourning the loss of my sweet Grandmom. I am so thankful for all the special moments we shared and glad my children were able to love and cherish her as much as I did. 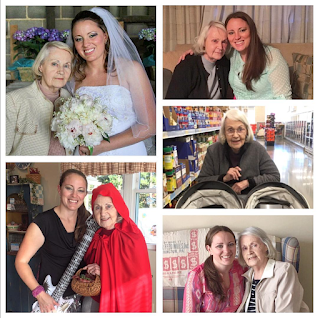 I will be revealing my newest painting at a different time, stay tuned for an update.
Posted by Kimberly English at 7:55 AM No comments:

I am so excited to share that I have been selected to participate in the 2018 Artists Creative Capital Professional Development Program. It is a four month program designed to help New Jersey artists reach the next level in their careers through in person workshops, online classes, and group consultations.

I am so grateful to be selected for this amazing opportunity and honored to represent Salem County. I’m excited to learn new ways how my paintings and photography can serve as a platform to promote and advocate for the active agricultural community in southern New Jersey.

This past weekend I participated in the first event of the Creative Capital Artist Professional Development Program. We met at Stockton University's Kramer Hall in beautiful Hammonton, NJ. The session was for 30 selected southern New Jersey artists to help develop their artistic career. Our first portion was about Strategic Planning with Ela Trojan and James Scruggs, our instructors.

We first discuss elevator speeches, a technique used to have a brief introduction rehearsed to deliver to people interested in your artwork. It should be about 40-60 seconds and provide a brief background to your work as well as what you are currently working on. We took time to write our own and then practiced delivering them with a partner. We then worked on a specific meeting and negotiation role playing with one of the artists in the group who had an upcoming meeting.

After lunch, we then broke into smaller groups to discuss finances and time/business management. My first group talked about art business management. Some topics included: pricing, contracts, negotiating, and business types. When switched presenters and discussed finances in running an art business. Some topics we covered were: budgeting and different income streams.

We will continue to learn through webinars, online classes and a wrap up event in Trenton in September. This opportunity is made possible by the South Jersey Cultural Alliance, Geraldine R. Dodge Foundation, New Jersey State Council on the Arts, and Creative Capital. 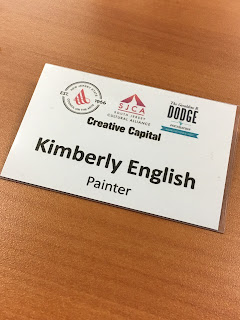 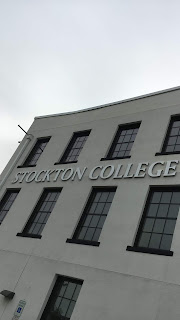 Posted by Kimberly English at 8:02 AM No comments:

Come celebrate Mother’s Day with your child or grandchild at Creamy Acres! Each pair will create a 2 canvas composition that when put together, makes one image! Participants will be guided by professional artist and art teacher, Kimberly English. All supplies are included in the price. $40 per pair. Suggested age: 5 & up. 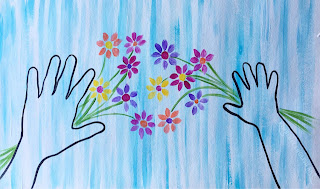 Posted by Kimberly English at 8:03 AM No comments: 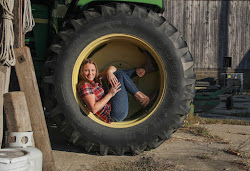 I am a professional acrylic painter portraying the fields, equipment, and operations of the active agricultural community in southern New Jersey. My paintings are realistic renderings that illuminate the often overlooked beauty that exists within farming and country living. I am passionate about creating artwork that honors the hard work and sacrifices that farmers make everyday. I hope to connect the larger, non-farming population and the people that choose to dedicate their life to agriculture.